A stage-by-stage guide to your baby’s language development.

Talking is one of the biggest milestones there is, and the latest research suggests there’s a lot you can do to help your child become a master chatter.

Months before my daughter Ella spat out her first official word (“bath!”), she was a Chatty Cathy in terms of sheer noise–exercising her pipes by howling for a feeding, squealing at a sock puppet, or babbling “ba ba ba” at the top of her lungs. And it turns out there’s a reason behind the racket. For babies, it’s a kind of linguistic cross-training–a way they prep for the main event of real speech, otherwise known as one of the coolest milestones ever.

The average age at which kids utter a bona fide first word is 12 months, and they’re able to manage two-word “sentences” by the time they’re 2. But (reality check!) as any pediatrician will attest, babies hit language milestones at a wide range of ages. A child who seems behind can all of a sudden make a giant leap ahead of her peers, verbally. And a kid who starts talking early may get stuck on the same few words for months before adding more to her repertoire. So no comparing or panicking! Sure, you can hardly wait to hear that first word or “wuv you.” But like all Big Moments in your baby’s life–sleeping through the night, sitting up, first steps–it will happen when she’s ready.

There are, however, proven ways you can nudge language development along, experts say. Check out our stage-by-stage (and completely anxiety-free!) guide to baby talk for the scoop on what you’ll hear, when to expect it, and how best to keep up your end of the conversation. 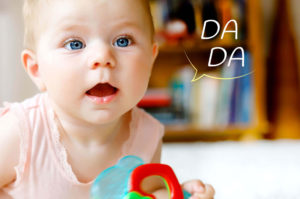 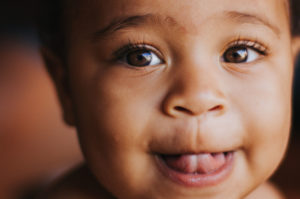 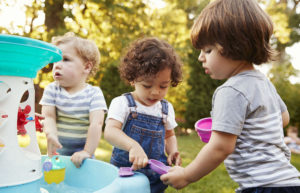 1 Month : Waaah.
Crying may not sound conversational, but it’s your newborn’s primary way to communicate, meaning she uses it for everything from “I’m tired” and “I need food” to “It’s a little too bright in here.” Wailing also primes your baby for genuine language by strengthening the same neural pathways in the brain that are used for speech–and by giving her larynx, the organ in the throat responsible for sound production, a good workout.

What to say back: Something that will soothe the fussing and squalling. While a good cry may exercise your baby’s vocal cords, the sooner you can comfort her, the more confident she’ll be that you’re really listening to her–and the more willing she’ll be to keep trying to “tell” you what she’s feeling.

2 to 5 months : Ooh?aah.
Those supercute coos are airy sounds that come straight from the larynx–making them easy to say for tiny babies still figuring out how to use their lips and tongues. They’re also fun. “Kids tend to focus on particular sounds: squeals, vowels, or growls, as we call them,” says D. Kimbrough Oller, Ph.D., a professor of audiology and speech-language pathology at the University of Memphis. These will help your little one learn to control vocal tone and volume–something she’ll need to form her first word.

What to say back: Anything in “parentese,” that singsongy voice that sounds like it came off a children’s CD–only it’s you repeating “Hiiiii!” Research shows the high pitch makes your infant really take notice of–and want to imitate–what you say.

5 to 7 months : Ah?goo.
When your baby begins to add in consonants, it means she’s now able to produce a full repertoire of sounds–a major linguistic milestone. “It’s harder to produce consonants because they require interaction between the tongue and the lips,” says Roberta Golinkoff, Ph.D., director of the University of Delaware Infant Language Project in Newark. “It’s a big deal.”

What to say back: Narrate the sights you see on your drive or your daily plans (“We’re going to the store for some milk, and then Daddy’s taking you to the park!”). Talking to a non-talker may feel bizarre, but research has found that infants actually understand far more than we realize. In one study, 6-month-olds who heard the word “mommy” responded by looking at a picture of their mom.

7 to 9 months : Ma-ma-ma.
Was that a first word? Hmm? Though your baby is probably still simply parroting sounds, once she starts babbling in distinct syllables, her “conversation” can sound so much like language that it’s hard to tell. Consider this her final dress rehearsal for putting those syllables together in a way that has real meaning.

What to say back: Talk about the things around her so she’ll connect objects with words. Just don’t assume “bo-bo” means “ball” if she says it while reaching for her shoe. “Notice where your child is looking before you label an object. It’s very adaptive for babies–and a lot of parents do it naturally,” says Jenny Saffran, Ph.D., director of the Infant Learning Lab at the University of Wisconsin-Madison.

9 to 12 months : Nee-nigh.
Getting out just the right sounds takes practice, so for now, your baby’s making up combos that indicate real objects–a halfway point between babbling and true speech. She may say “nee-nigh” for “bottle,” or “sho-sho” for “yogurt,” for example.

What to say back: As long as you know what your baby’s trying to say, don’t quibble over correct pronunciation. Swapping in weird names for regular words is normal for new talkers–so your best move is to respond in a way that shows you understand: She says “banktee,” you produce her blanket. It’s cute to hear (and say) her made-up words, and experts say it’s fine if “banktee” becomes de rigueur in your household. Eventually, you’ll phase it out for the real thing.

12 to 15 months : Dog.
Whatever recognizable word your child produces first, it’s bound to be something she’s fascinated by and something she can easily say–which is why the single-syllable “Da,” “Ma,” “ball,” and, yes, “dog” are fairly common first words. “Kitten” and “television”? Not so much.

What to say back: “Hurrah!” Cheering on her speaking attempts will motivate her to master new words. Plus, Golinkoff notes that the rule for babies learning to talk is “the more language in, the more language out.” So keep chatting! By doing so, you’re supplying the words for interesting objects and emotions. Add that to praising her for using the ones she already knows and you’ll soon have a total motor mouth on your hands.

15 to 18 months : Go.
After your toddler has spit out that first word, she’ll learn what she needs to do to make others–including different parts of speech, like verbs and adjectives. By 15 months, most kids are able to say 20 or more words, and the lexicon expands as weeks go by.

What to say back: Cuddle up with a good story for a no-brainer vocab booster. Perfect at this age: board books filled with short-and-sweet words, like Where Is Baby’s Belly Button? by Karen Katz, or Dear Zoo, by Rod Campbell. “Talk about what’s in the pictures, as well,” suggests Julie Masterson, coauthor of Beyond Baby Talk: From Sounds to Sentences, A Parent’s Complete Guide to Language Development. “It’s fun for kids to hear you say ‘See the dog? It says ‘woof.’”

18 to 22 months : Da-me-fo-bee.
You know your toddler is saying something amazing–if only you could understand it. In their second year, kids become masters of nonsensical speech, producing strings of elegant gibberish that sound like a faux version of adult conversation (often complete with inflection and hand gestures). She’ll also be saying around 30 or so real words-but even those may not be crystal clear.

What to say back: Ask questions that get your kid talking. If she says “boo-bee-lala” while building a block tower, ask “What do you like about the blocks?” One recent study in the journal Pediatrics showed that back-and-forth conversations between adults and little ones are the best way to improve their verbal skills.

22 to 24 months : More milk.
By the time she turns 2, your toddler will likely be able to string two or three words together to make mini-sentences. A favorite to throw into the mix of the dozens of words in her growing vocabulary: “more.” It’s a sign that your kid is figuring out the ability of language to make things happen.

What to say back: Give her what she asks for! (Within reason, of course.) Being able to tell you what she wants is a major milestone for her, but it’s a happy day for you, too. Just think: fewer meltdowns over misunderstood requests! And by responding, you show her just how powerful and rewarding talking really can be.

Are girls really more verbal?
Experts say that, for reasons yet unknown, females usually hit verbal milestones a bit earlier than males. “Speech delays and disorders also occur more frequently in boys,” says Julie Masterson, a communications professor at Missouri State University. However, language skills do tend to even out over time–and you certainly can help the process by talking to and reading with your kids.

Help for late talkers
Your friend’s baby is producing complex sentences at 15 months; at the same age, your little one is content to mumble “Mama.” Should you worry? It’s hard not to! But the “normal” range for babies is huge–anything from 9 months to 15 months for the first word, for instance. Bilingual kids may hit milestones later, as they work to process two different languages (and the mouth actions it takes to produce them). However, 1 in 5 kids will have a speech or language delay of some sort–so watch for these red flags:

And let a few plates drop. You only need your cup.

Getting Ready for Easter!